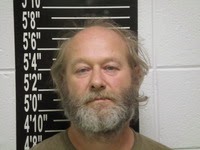 A registered sex offender who pled guilty to two counts of statutory sodomy in May will spend the rest of his life in prison.

William "Timothy" Kelley, 49, of Reeds Spring, was arrested last November after two young girls Kelley's mother babysat told authorities he inappropriately touched them at the home he shared with his parents.

The father of the two victims, ages 6 and 7, "noticed they were acting out sexually and asked them if anyone had touched them on their privates," said Stone County Prosecutor Matt Selby.  The girls said Tim Kelley molested them on multiple occasions in his bedroom, which they described in detail.
When Detective Bruce Belin interviewed Kelley, he admitted that he molested the sisters "on a number of occasions during the fall of 2013."  In 1992 Kelley was convicted of similar crimes with a six and eight year-old.  He served five years in prison for those crimes.
Selby told Judge Jack Goodman that the crimes have had a devastating effect" on the victims and their family.
"The best indicator of future conduct is past behavior," said Selby.  "The defendant has two strikes and society should be protected from the possibility of a third”.
In an unrelated case, Kelley's brother, Johnny Allen Kelley, 55, was charged with possession of child pornography after authorities seized his laptop during the execution of a search warrant to gather evidence in his brother's case.

A forensic search of the device turned up numerous images of suspected child pornography and sexually explicit stories involving underage girls, according to court records.

Johnny Kelley, who was arrested in December 2013, allegedly admitted to cops that he downloaded the images to his computer.