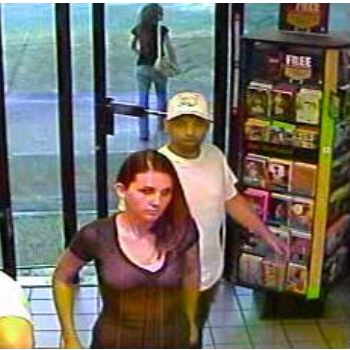 The Stone County Sheriff's Office is asking for help from the public in identifying two people who allegedly stole credit cards from a bag at Silver Dollar City on July 5th.

Chief Deputy Tim Gideon says a couple from Kansas left their belongings in a storage cubby while on a ride at the amusement park. "A bag containing their belongings was stolen but recovered, missing were their credit cards."

The alleged thieves were seen driving a red passenger car, according to Gideon.

If you have any information as to whom the suspects are or their whereabouts please call Detective Matt Maggard at 417-357-3049.
Posted by Kathee Baird at 1:37 PM