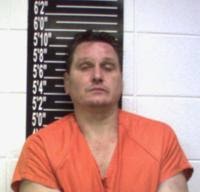 In January of 2013 Deputy Nathan Boone and Deputy Dustin Wells were called to Joey Plunkett's home for a domestic disturbance.
Kara Nichole Plunkett told dispatchers that her husband was ramming their mobile home with his truck that contained fuel filled barrels.When the law enforcers approached the mobile home at 522 Craig Street they found Plunkett, 44, walking from the front of the home toward his truck and illuminated him with their spotlights and ordered him to stop.Plunkett ignored the warning and got into his vehicle and locked the door, according to Deputy Boone.  Boone said Plunkett refused to get out of his locked vehicle and threw the car in reverse, almost striking Deputy Wells.Plunkett then drove to the back yard where his vehicle got stuck after he hit a swing set.Plunkett again refused commands to exit the vehicle so the law enforcers broke out the driver and passenger windows, according to court testimony.  At some point during the scuffle, Plunkett allegedly grabbed a glass jar containing fuel and threw it in Deputy Boone's face.When Plunkett continually refused to exit the vehicle he was tazered, which had no effect on him, according to Boone.  As he was being handcuffed a lighter was found in his hand.

Plunkett told jurors that he was upset the day of the incident because his doctor "fired him" for abusing morphine.On the way to the Stone County jail Plunkett told Boone that "he didn't think they were really police officers."

“We take all cases of assault on a law enforcement officer seriously, and this one was especially heinous and life threatening. It was obvious to me the jury took their job very seriously and thoughtfully returned guilty verdicts on each count,” said Stone County prosecutor Matt Selby.

The jury has recommended a 15 year sentence on the first count, with additional 7 year and 4 year sentences on the remaining counts.

Plunkett will be formally sentenced on September 16, 2014.