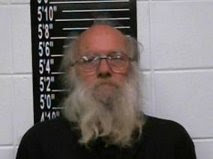 Robert Pickett Smith (mug shot SCSO)
Authorities in Stone County and C.O.M.E.T drug officers had been watching the home an elderly man for some time and when they executed a search warrant at 357 OO Highway in Reeds Spring they allegedly found over five pounds of pot, some of it already packaged for sale, in the man's home.
Sheriff Doug Rader says over $5000.00 in cash was also confiscated at seventy one year-old Robert Smith's home.  Also seized "were several items of paraphernalia used in the packaging, sales and use of marijuana.
Smith, who has been charged with distribution/possession of a controlled substance, is being held on a $50,000 cash only bond.
Posted by Kathee Baird at 5:50 PM

Again stone county busting someone for pot. I'm so glad I don't live there anymore.

I wish they would legalize it and tax it really high. Would free up a lot of jail space and court time, IMHO.

The arrest was the crime here. Why not use some discretion in cases like these?

America home of the incarcerated.

Yup u are right. Go after criminals. Not pot

What a waste of taxpayer's money.....can't the sheriff's departments find real criminals to bust instead of innocent people growing plants for pain medicine....give me a break....shame on you stone county, next thing you will be staking out is organic tomato plant growers; disgusting, leave this poor guy alone.