5:01 PM
Kathee Baird
0
-
-
An international fugitive who has been on the run for nearly twenty years has been arrested in Christian County.

Ozark Police Chief Lyle Hodges says Maher, 56, was apprehended about 11 a.m. today (02-08-12) following a tip on February 6th to an Ozark police officer and that he was living in the area for the last few years under the assumed name of his brother Michael "Mike" Maher and working for Suddenlink cable company.

"I am very proud of patrol officer David Overcast and Detective Kevin Boyce who took a tip and developed it leading to the arrest of international fugitive Eddie Maher.  It feels great that our guys got someone that everyone had given up on finding," said Hodges.


The FBI says Maher is being held on immigration charges while they confirm with Interpol whether or not Maher has outstanding warrants from the United Kingdom. 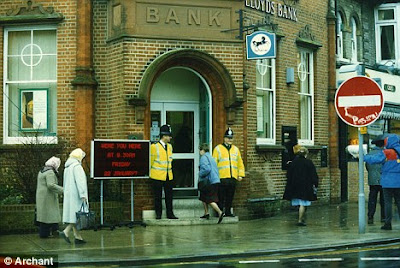 According an article in the Ipswich Star, a newspaper based in the U. K., Maher stole the money from Lloyds Bank in Felixstowe when another security guard went inside to make a delivery. Maher, a former fireman and expert locksmith, was known to have gambling debts, the paper said. 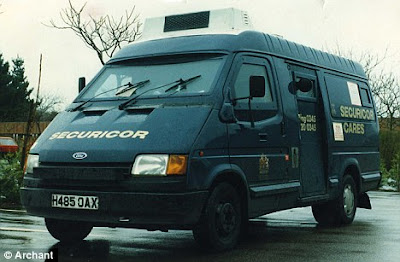 Maher was able to escape because it took 45 minutes for cops to locate the armored van, which was equipped with a tracking device.  He transferred the stolen loot to a stolen Toyota Previa with fake license plates and later switched cars again, before boarding a plane for the United States.
-

-
Authorities tracking Maher discovered that Maher’s girlfriend Debbie and their son Lee, then aged four, were in a hotel in Boston at the time of the heist.  Lee was found to also be living in Ozark and using the last name of King.  He was told he was two years older than he actually is and had no knowledge of his father's criminal past.

Maher has now been charged in federal court with illegally possessing firearms.

According to a news release from Beth Phillips, United States Attorney for the Western District of Missouri, "Maher told federal agents that he began working in the United States in 1998 and had been using the identity of his brother, Michael Maher, who lives in England.  Police officers seized the firearms from Maher's residence and from a storage facility in Ozark.  Under federal law, it is unlawful for an illegal alien to possess any firearms or ammunition."

According to the criminal complaint filed in federal court against Maher, Lee King was arrested on traffic warrants out of Ozark and jailed in Nixa.

When Maher went to bond his son out of jail he told an officer he wanted to file a complaint against his son's wife because she had allegedly stolen one of his guns.  After the report was made, a Nixa police officer told Maher that he knew he was wanted in England, but he could not arrest him.

King asked his dad about the allegation after they left the police station and he told officer's his father was, "irate" and said they would have to leave again. He also allegeldy "threatened to kill the person who tipped the police off about his identity."

While Maher's son was being interviewed by the FBI on February 7th - he [Maher] called and said the had to leave immediately.  King told his father "he could not go with him."  Shorty thereafter, Maher, who was under surveillance by the Ozark Police Department, was observed leaving his home with a woman and a juvenile male.

On February 8th, Lee King contacted the FBI and told them his father had checked into a hotel in Ozarks "because he was afraid police were coming to his house to arrest him."  Later Maher told his son that he had changed his mind and was going back home, "and if the police were going to arrest him, he would not resist." 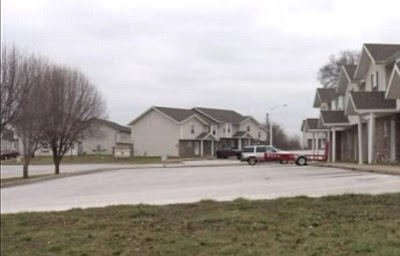 Later on the 8th FBI agents and officials from Immigration and Customs Enforcement made contact with Maher at his residence.  When agents asked him what his name was he responded "Michael Maher" and produced a Missouri drivers license.  Maher was taken into custody by ICE agents to determine his immigration status.

Maher's wife, who was also at the residence, identified herself as Deborah Ann Brett (she also uses the name Deborah King.) She told agents that her husband had used the aliases "Stephen King but primarily Michael Maher and the alias date of birth of 4-17-1951."
-
Brett told agents her husband had used his brother Michael Maher's identification to obtain work and other state identification.   Brett told investigators that Maher had obtained several firearms while he was on the lam and that she didn't want them and they were confiscated.

Maher admitted to obtaining several firearms while in the States but did not elaborate on how or where they were purchased. However, he did tell authorities he purchased the Moisan Nagant rifle at a sporting goods store.

When Maher was interviewed by authorities he waived his right to have a lawyer present while being questioned.  He acknowledged that his true name is Edward John Maher and his actual birth date is 6-2-1955.  He told agents that he began using his brother's alias when he began working in the United States in 1998 and that he was in the country illegally.
-
Property records show someone using the name Michael Maher lived in New Hampshire, mainly in Concord, from 1997 until 2006. He was also connected with homes in Florida, Wisconsin and Minnesota.

Maher told cops that he "obtained a Social Security number in the name of his brother and other false identification in the U. S. to conceal his true identity because he was wanted for a crime he committed in England."

Brett says if her husband is sent back to England then the family will go there too.
-
COMPLETE NEWS RELEASE:

Beth Phillips, United States Attorney for the Western District of Missouri, announced that a fugitive from England who was arrested in Ozark, Mo., was charged in federal court today with illegally possessing firearms.

-
Edward John Maher, also known as Michael Maher, 56, of Ozark, was charged with being an illegal alien in possession of firearms in a federal criminal complaint filed in the U.S. District Court in Springfield, Mo.
-
Today’s criminal complaint alleges that Maher, an illegal alien, was in possession of a Hi-Point .45-caliber pistol, a Jennings .380 pistol, a Mauser 7.62x39 rifle, and a Mossberg .22-caliber rifle.
-
According to an affidavit filed in support of today’s complaint, the Ozark Police Department received information on Monday, Feb. 6, 2012, regarding a fugitive from England who allegedly stole a large amount of cash while working as a security guard. Ozark police officers and FBI agents conducted surveillance of Maher until he was arrested on Wednesday, Feb. 8, 2012.
-
Maher told federal agents that he began working in the United States in 1998 and has been using the identity of his brother, Michael Maher, who lives in England. Police officers seized the firearms from Maher’s residence and from a storage facility in Ozark. Under federal law, it is unlawful for an illegal alien to possess any firearms or ammunition.
-
Phillips cautioned that the charge contained in this complaint is simply an accusation, and not evidence of guilt. Evidence supporting the charge must be presented to a federal trial jury, whose duty is to determine guilt or innocence.
-
This case is being prosecuted by Supervisory Assistant U.S. Attorney Michael S. Oliver. It was investigated by the FBI, the U.S. Marshals Service and the Ozark, Mo., Police Department.
Posted by Kathee Baird at 5:01 PM