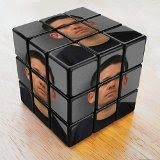 Prosecutor's charged Ibarra with three counts of felony assault and one count of felony tampering with evidence.

The probable cause statement says Ibarra was driving a vehicle near center city and was stopped at several green lights.  One of the victims told investigators that he honked his horn and Ibarra followed him to a house and identified himself as a city council member.

After words were exchanged several people told Ibarra they were calling police and he said "to do it."  He responded he would also call cops.  When one of  them men reached in Ibarra's vehicle to grab the keys out of the ignition and a beer bottle allegedly in the console of the car, Ibarra threw his vehicle in reverse, dragging two men who sustained injuries.

The investigating officer says Ibarra, who resigned from his City Council seat several weeks ago, attempted to hide a near empty bottle of vodka in the sleeve of his sweatshirt as his vehicle was being searched.

Last month prosecutors charged Ibarra with unlawful use of a weapon following a New Year's day incident in which he threatened to kill himself and his wife.

Prosecutors want the court to order Ibarra to stay away from alcohol and wear an alcohol detection bracelet.  They are also asking for a $5,000 bond.
Posted by Kathee Baird at 11:31 AM