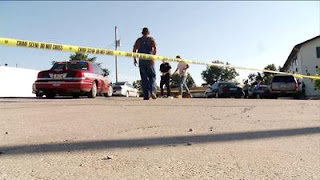 Authorities are waiting for a judge to sign a search warrant so they can enter an apartment in at the Country Inn apartments in Seymour where a man was found dead about noon today (09-17-10.)

Police say officers were called to 1050 E. Clinton by a family member of the deceased man. According to a law enforcement source, "There is a large quantity of blood at the crime scene."
-
UPDATE:

That search warrant was executed this evening and authorities say the man, who is in his 40's, suffered traumatic injuries.

Crime scene tape still surrounded the complex late this evening. Residents of the complex were allowed to leave, but had to sign in and out with authorities.
-
UPDATE 09-18-10 7:50 p.m.:
The death of Johnnie E. Jones was a result of a fall and natural causes, according to a law enforcement source.
Posted by Kathee Baird at 6:16 PM