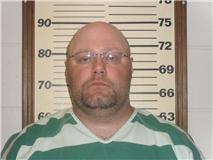 A man who was being held on burglary charges in Texas County was found unresponsive in his jail cell about 8 this morning.

Watson says Young was on medication for pre-existing medical conditions and that no foul play is suspected in his death. An autopsy will be performed in Springfield.
Posted by Kathee Baird at 3:31 PM