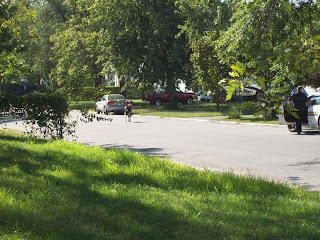 This story is not remotely crime related, but it makes me smile!

A goat that has been wandering around the small eastern Missouri town of Mexico has a facebook following, much to the chagrin of animal control officers.

KXEO reports that the goat was first spotted by a motorist last Saturday near an underpass on the east side of town. Animal control says it has fielded more than a dozen reports of the adult goat being seen around town, including downtown Mexico.

Officers, who have named the wandering animal, Billy Goat Gruff, are trying to catch the goat.

Now people are donning t-shirts that say "Goat Watch 2010" on the front, and "Catch me if you can" on the back.

In a time where there is just so much bad news, it's refreshing, at least for me, to have a chuckle!
Posted by Kathee Baird at 3:06 PM

I'm surprised you haven't posted about the shooting in Competition. looking forward to it.

I have been out of town for several days. I am planning on it.