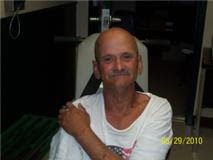 A judge in Webster County found a Seymour man guilty of assault of a law enforcement officer after the man intentionally tried to infect a Fordland police officer with the HIV virus.

On May 29th Officer Josh Burris was transporting Michael Sartin, who was arrested on an outstanding warrant, to the Webster County jail when he noticed Sartin attempting to slip out of his handcuffs. As Burris adjusted the cuffs, Sartin bit his tongue and then spat in the officer's face as he put him back in the patrol car.

According to court documents, Sartin told Burris, "I bit my tongue . . . it's bleeding, so now you can have HIV like me. . . Now you're gonna know what it's like to live knowin' you're gonna die." Burris says that on the ride to jail Sartin, "made several threats of how he was going to kill me and members of my family."

Burris has tested negative for virus that causes AIDS.
Posted by Kathee Baird at 1:10 PM