Christian County Deputy Charged With Unlawful Use Of A Weapon In Two States: 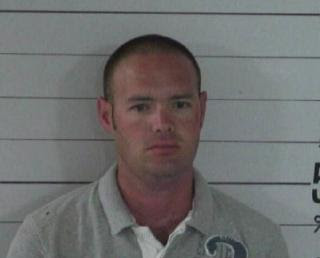 An off duty deputy from Christian County has been charged with unlawful use of a weapon after allegedly firing his service revolver during a dispute with a woman near the Missouri/Kansas border Saturday.

Authorities in Crawford County, Kansas received a 9-1-1 call from a woman who told them that Brent W. Paoli fired two shots and ran into the woods. She told investigators that Paoli allegedly fired another shot from a 9 mm handgun at her vehicle as she drove away.

Officers at the scene heard a fourth shot a short time later, according to the Crawford County Sheriff’s Department.

About two hours later authorities received information that Paoli was in the area of the Mo-Kan Dragway on the Missouri side of the state line. A Kansas Highway Patrol chopper spotted him hiding near the speedway, where he was taken into custody by Jasper County authorities.

Paoli, who is a corporal and has been with department for almost four years, was placed on paid administrative leave while an internal investigation is conducted.
--
He was released from custody after posting $3,500 bond.
--
Christian County Sheriff Joey Kyle says Paoli is one of his better officers and that he has had no disciplinary issues with him.
Posted by Kathee Baird at 8:28 PM

kyle said this is one of his better cops,OMG what does that say about these other morons that this county employs,,look christian county is the most corrupt county in mo, it took another agency to reel in this mental midget,,kyle said that he had no disciplinary issues with this clown, thats because when people complain they complain to a deaf ear,,maybe someday we will get a sheriff that WILL clean house ,,,one down, and many more to go

This is true. I witnessed captain gillman of the sheriffs department have a u.s. soldier arrested for trespassing when the police gave him permission to get his stuff from the house he lived in for almost 6 years. All because the soldiers ex girlfriend works for him