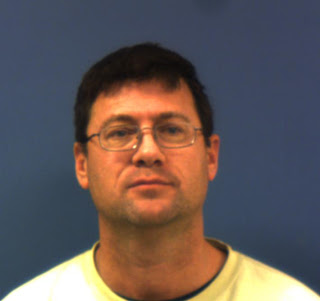 Authorities in Rolla say a man from McCook, Ill., traveled to Rolla, to allegedly kill his estranged wife and son, police say.
Lowell Doric Aughenbaugh, 47, was arrested over the weekend (01-03-10) and charged with making a terrorist threat, resisiting arrest and telephone harassment.
Court documents say that Aughenbaugh also was allegedly plotting to "blow up the Rolla Police Department, kill everyone inside and then kill himself." Augenbaugh's wife and son said that he was "preparing for a "world crisis and considered himself to be an extreme survivalist."
According to the probable cause statement, Augenbaugh's estranged wife called them about 11:30 p.m. on New Year's Eve and reported that her husband had threatened to come to Rolla to "kill her and her entire family." She told cops that she "believed her husband was mentally unstable and would carry out the threats against her and her family. She told police that her family "felt the threats were valid and most of them left town in fear for their own safety."
The woman told cops that Augenbaugh said that after he killed his family "he would blow up the Rolla police department and kill everyone inside....then himself." The wife and son told officers it was "a life long fantasy of Lowell's to attack a police department."
On January 3, 2010, the family called police to report Aughenbaugh was outside his sons home and in the process of stealing a truck. After an hour of searching cops located Augebaugh not far from his wife's house and pulled him over.
Authorities say that Aughenbaugh refused to get out of the truck or show his hands....and that he kept looking down at his lap. After a fifteen minute standoff Augenbaugh surrendered and he was taken into custody.
After the arrest, police say family members showed them two storage units were Aughenbaugh had been stockpiling weapons. A combined follow-up investigation is being conducted by the Rolla Police Department, Phelps County Sheriff’s Department, Missouri State Highway Patrol and the U.S. Bureau of Alcohol, Tobacco, Firearms and Explosives. During investigation, numerous agencies from Illinois were also contacted and became involved.
As a result of the Inter-Departmental cooperation a plethora of items were recovered that are closely related to the charges, including a cache almost 100 firearms, some of which had been converted to automatic, approximately 300,000 rounds of various caliber ammunition, and a number of items closely associated with the manufacture of explosive devices. A pipe bomb was also recovered. 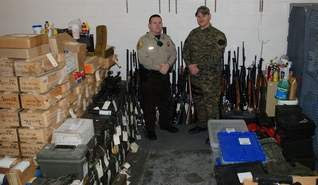 Cops also found fully automatic weapons, several thousands more rounds of ammunition, armor piercing rounds from the property of Aughenbaugh’s father-in-law.
Aughenbaugh, who was released after posting $100,000 bond, is scheduled to appear in court on January 12, 2010.
SergeantAndy Davis of the Phelps County Sheriff's Office says the investigation is still ongoing.

Full News Release:
On Saturday, January 2, 2010 Law Enforcement Agencies began receiving intelligence that indicated a resident from McCook, Illinois was in route to the Rolla/Phelps County Area to kill his estranged wife and children. During the initial follow-up of the investigation it was also learned the suspect had threatened the Rolla City Police Department and lives of any Law Enforcement Officer who became involved.

On Sunday Morning a vehicle was reported stolen from the suspect’s sons residence on Highland Road in Rolla. A Rolla Police Officer observed the vehicle leaving the vicinity and stopped it in the vicinity of the Forum Plaza.

Lowell Doric Aughenbaugh, a 47 year old former residence of Phelps County and current resident of McCook, IL, was arrested by Officer from the Rolla Police Department and Phelps County Sheriff’s Department or charges of Making Terroristic Threats, Resisting Arrest by other than Flight, Resisting or Interfering with Arrest for a Felony and Telephone Harassment.

After the arrest, a joint follow-up investigation was initiated involving Officers, Detectives, Troopers, and Special Agents from the Rolla Police Department, Phelps County Sheriff’s Department, Missouri State Highway Patrol and the Bureau of Alcohol, Tobacco, Firearms and Explosives. During the course of this investigation numerous agencies from Illinois were also contacted and became involved.

As a result of the Inter-Departmental cooperation a plethora of items were recovered that are closely related to the charges, including a cache almost 100 firearms, some of which had been converted to automatic, approximately 300,000 rounds of various caliber ammunition, and a number of items closely associated with the manufacture of explosive devices.

A warrant was issued charging Mr. Aughenbaugh with Making a Terrorist Threat with reckless Disregard of Causing the Evacuation/Closing of a Building and bond was set at $100,000.00. Bond was posted by Fincher Bail Bonds and a hearing is set for January 12, 2010 at 9:00AM before Judge Ron White.

At the time of this release, the investigation is still on-going.

The charges for which Mr. Aughenbaugh has been arrested and charged with are merely accusations and are not evidence of guilt. Evidence in support of the charges must be presented before a court of competent jurisdiction whose duty is to determine their guilt or innocence.
Posted by Kathee Baird at 9:04 PM

Hey what about how his wife told him she was sleeping with someone else and planned to divorce him after she was here for a couple of months trying to work things out?"!!! Wheres that story?"

And that she and the son are the only ones that reported the alleged threat, and everything was stored on her father's property, most of the weapons were purchased and registered to her, or in a storage unit rented by the son, and that there are MILLIONS of dollars at stake here, that she stands to gain in the divorce? fascinating how things are playing out...

I prefer to remain anonymous, but I met the guy after this entire incident and still consider him a friend. He didnt seem extreme or insane or anything. His wife ( idk about the son only that they werent on good terms) was out to get his oil company. Ortek inc. I believe was the name....in the brief time i knew Lowell, he was tge most generous, kind, rational person i knew, well rooted in the bible which was the topic of lots of conversations i had with him. I am a christian now, due in large part to him. He bought me my first bible. Anyway just wanted to share my two cents and would like to know what happened to him.

he moved to fredricburge mo and owns archway motors