Fatal Shooting Justified According To Prosecutor: 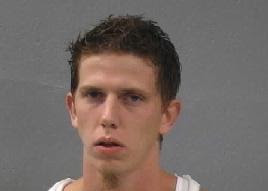 Back on November 24, 2008, a Greene County deputy and a U.S. deputy marshal used justifiable force when they killed Lance Anderson, 22, who was wanted for vehicle burglaries and stolen handguns.

Witnesses told investigators that officers said Anderson got out of a pickup during a traffic stop and fired a gun, causing officers to return fire. Investigatars say the 22 year-old man told two men inside the pickup he was going to shoot himself.

A joint fugitive task force had been looking for the 22-year-old man after the Bolivar police issued a BOLO for Anderson who fired rounds at a Bolivar police officer the previous day.

Moore, said in a written statement released Wednesday that, "the officers exercised force which they reasonably believed necessary to prevent serious physical injury or death to themselves" when they shot Lance Anderson, who also shot himself in the abdomen and head.

His girlfriend told authorities that he'd been living with her in Bolivar for several weeks before the shooting.

The Greene County Sheriff's Department and the U.S. Marshals Service have not identified the officers, and Moore also did not name them in his statement.
Posted by Kathee Baird at 7:51 AM