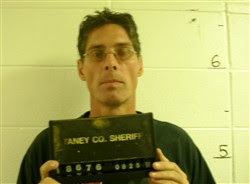 A man from Taney County could be facing a life sentence if he is convicted of numerous sex crimes against children.
Taney County prosecutor Jeff Merrell has charged Robert David Nelson, 44, Kissee Mills, with four counts of first-degree child molestation, one count of statutory rape, one count of attempted statutory sodomy and two counts of sexual misconduct with a child. Merrell says that all of the alleged victims knew Nelson and are under the age of twelve.
Nelson's bond has been set at 200-thousand dollars. His next court date is pending.
****Greg Brock contributed to this story
Posted by Kathee Baird at 9:45 PM