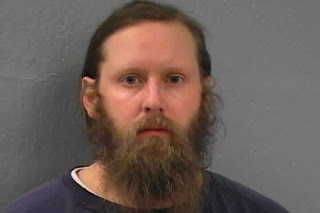 A man from Brighton has admitted to beating and stomping his grandmother to death and severely injuring his great-grandmother in 2004.

On Nov. 18, 2004, Joe Davidson Music, 35, said he was going to assist his seventy two year-old grandmother, Frances Nadine Geihl, into the family's home. Witnesses next heard Mrs. Geihl screaming for help and went outside and saw Music kicking and stomping her head with the steel toed boots he was wearing. A home care aide at the home to assist Music's great-grandmother attempted to help Geihl but Music flung her away. The aide then called 9-1-1.

Music's great-grandmother, Eva Aslinger, 89, attempted to help shield her daughter with her arm and begged her grandson to stop the assault, but Music stomped and kicked her too, tearing the elderly woman's skin.

Greene County Assistant Prosecutor Amy Fite says Music hid his blood-spattered boots in an outbuilding on the property, where Greene County sheriff's deputies retrieved them. The pants that Music was wearing when he was taken into custody were splattered with his grandmother's blood according to tests conducted by the Missouri State Crime Lab.

Music has been in custody at Fulton State Hospital for treatment and evaluations for the last several year. At one time attorneys for Music were contemplating using a not guilty by reason of mental disease or defect defense.

Earlier this year prosecutors offered Music 11 years in exchange for his guilty plea and it looked like he was going to accept the offer. However, not long before the case was set to go to trial earlier this year Music changed his mind and wanted a jury trial.

Because Music was previously convicted of stealing and burglary he was found to be a prior and persistent offender, therefore he will have to serve at least 85 percent of his sentence before he is eligible for parole.
Posted by Kathee Baird at 6:23 PM

I am so glad he is going to be put away for a lot of years. I knew Eva. SHe was such a wonderful sweet lady. Her and her daughter did not deserve this

nadine was my cousin and eve was my aunt i live in st louis. eve was my mothers sister and nadine and Evelived nest door to one another and this was an atrocity, no words could explain, when my mom called me while i was teaching a piano lesson i know i was in shock idon't really use the computer too much but my cousin told me that i could look the story up. I could say a lot more of who prompted Joes demonic act ? idea, drugs and his mother . oh he is guilty , but who planted the seed the manipulative farmer, his mommy, and then my aunt dies after the asssalt and finds her save was gone with her life savings how about that? mommy dearest is also responsible and I let her know that at my dear wonderful Aunt eves funeral i could not make nadines funeral because of work There in heaven now and so is my mother Eunice believe me i would not want to be Vicki aka the compulsive and the wicked orchestrator of all that should have never occured She will be taken care of by the heavenly spirits I hope mom you won'tbe upset i said the truth