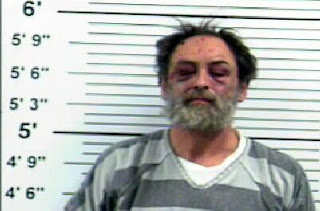 Authorities in Eureka Springs, Arkansas, are trying to get a man who allegedly attacked a downtown bar owner with a hatchet committed to a state mental hospital.

Court records say that Daniel J. Larmay, 49, of Eureka Springs, was arrested last week (12-19-09) at a bar he had been banned from, Eureka Live on North Main Street. Larmay had been banned from the bar after a previous incident, and when he returned Saturday, he allegedly walked behind the bar, grabbed co-owner Nancy Faber by the hair and threw her to the floor and raised a hatchet in the air.

Roger Faber, the woman's husband, and another bar patron grabbed the weapon and held Larmay down until cops got to the bar.

On the ride to the police station, Larmay, who was handcuffed with his hands behind him, was combative and able to get his hands in front of him.

Officer Brian Williams stopped his cruiser and removed Larmay from the unit to secure his hands behind his back again....that's when Larmay shoved the cop and attempted to flee. Larmay continued to fight with Williams and was pepper sprayed.

While Larmay was being processed into the jail he again became combative and was pepper sprayed again.

After being told he was going to be taken to the Carroll County jail, Larmay ran face-first into a wall and fell to the floor.

Eureka Springs Chief of Police Earl Hyatt says, "it kinda surprised everybody to be honest with you. Things like that don't happen very much around here....I'm just glad someone was there to stop it."

Larmay has been charged with attempted capital murder, battery, terroristic threatening, and commercial burglary.
Posted by Kathee Baird at 8:20 AM