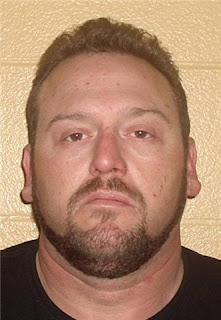 
A Nixa man has been charged with trying to hire someone to kill his estranged wife and stepson.

Prosecutors in Christian County charged Jimmie Michael Williamson, Jr., with conspiracy to commit murder after the man allegedly met with an undercover cop in Ozark yesterday (12-28-09) to set the plan in motion.

According to the probable cause statement, a "cooperating citizen" contacted police last week and told them of Williamson's alleged plan. The informant told authorities that if they did not intervene, "Jimmie had several shady contacts that might be willing to take him up on his offer."
Cops then had their informant set up a meeting with Williamson where it is alleged that Williamson offered the undercover officer, who was wearing a wire, $15,000 to have his family killed.

Court documents say that Williamson then drew the cop a diagram of his house at 940 Riverdale Road. When the cop asked Williamson if he still wanted to go through with the deal he said, "I don't see any other way. She's going to take me for everything. I don't have anything left. Either go all out to jail for ever, forever, forever, or just give her all my money."
Jimmie Williamson was in a motorcycle accident in which he lost a leg and received a substantial insurance settlement. 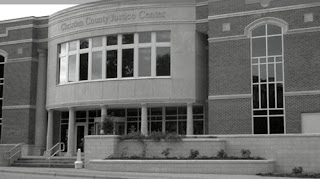 According to online court records, Donna Williamson filed for an order of protection (ex parte) order November 30th after an alleged domestic assault at the couples home. She and then filed for divorce on December 9th. Her son, Chad Cypret, was living in the basement of the couples home according to the probable cause statement.

It is alleged that Williamson told the undercover officer that he could pay him $2,500 a week every other week, but that once he got inside the house he could have anything he wanted including a "Harley in the garage."

When the cop asked Williamson about an alibi he pointed to an ankle bracelet that he had been outfitted with for another crime and stated, "they could located him anytime by pressing a button."

After the alleged meeting wrapped up, Williamson who left in a pickup truck, was pulled over and arrested. When cops searched him the found a loaded 9mm pistol that had been reported stolen out of Joplin.
While he was being questioned by cops about his alleged involvement in the murder-for-hire scheme, Williamson told investigators that "due to medication he was taking he really didn't remember most of the meeting with the undercover cop....and then he told them that he really didn't want his wife killed."
At the time of his December 28th arrest, Williamson was out of jail on a half million dollars bond for the alleged November 30th domestic assault. In that case he is also facing firearm and explosive charges as well as a drug paraphernalia charges. Cops say they found a meth pipe on Williamson when they searched him.

In addition to the conspiracy to commit murder charge, Williamson is also facing charges of receiving stolen property and unlawful possession of a weapon related to the December 28th arrest.
Williamson, who was formally arraigned, has pleaded not guilty. He is being held without bond and is due back in court on January 5, 2010.
Posted by Kathee Baird at 4:14 PM

Williamson has been convicted & sentenced in federal court