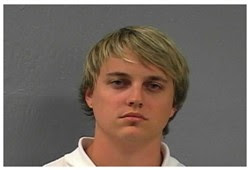 A man from Nixa will stand trial on charges of raping three women over a one year span.

Greene County prosecutors say that Jamison Scott Marquart, 23, raped and sodomized the women between April of 2007 and March of 2008.

According to probable cause statements, the women told investigators they went on dates and became disoriented/or unconscious when they went to his apartment.

The statements say that a DNA the women did suffer some physical injuries in the alleged attack and that semen was recovered from the victims.

Marquart is scheduled to be arraigned in circuit court on November 20th.

Marquart entered an Alford plea today.  While an Alford plea is not an admission of guilt, Marquart does concede that prosecutors had enough evidence against him to secure a conviction.

Marquart was sentenced to the maximum of 12 years pursuant to the plea agreement.  He will have to serve 85% of his sentence before he is eligible for parole.

Upon his release from prison, Marquart will be required to register as a sex offender and wear a GPS monitor for the rest of his life.

I, a female, worked with him when I was in high school and was friends with him up until 2008. He was a great guy until he starting using steroids to get to a body builder status. This was about the time the alleged incidents happened too. His mannerisms changed so much that he did odd things. Yes. We tried to date, but it didn't work for that reason, but we remained friends afterwards. I would hope he didn't commit these acts too, yet I would like to know where his apartment was because I know for a fact he was living with his parents at the time unless he used his cousin's or maybe another friends. The only reason I know because I picked him up on several occasions.

Why has it taken so long to put this guy in jail? The city is letting him run around town without any type of monitoring? I went to high school with him, he's always been kinda shady.....then fell back on the bible when he felt it necessary. I blame the judicial system for not locking this monster up sooner.....if he rapes again, who would be to blame?

I know this guy from church! I dated him and his dad was very involved in the church. He really was a creep even back to middle school days. He would put his hand up skirts in the middle of Sunday school, ask girls not to wear panties. I am serious. I would never falsey accuse someone of something like that. Of he could be that sick
In middle school days... It's not surprising to hear this. All the court documents are online and it gives his apt address. He is sick. His pre trial hearing is feb 7, 2012. It amazes me he was free this Long. Steroids are not an excuse! If u were the victim u would have a different point of view. Just sayin

I totally agree with the girl from Jan 24th. He did the same to me during sunday school. I also know others involved and know this is all true. He is a sick individual. Maybe his parents were too strict with him?! He was not to be seen with girls at church by his parents, that is why he would wait until we were in class to do stuff like this. I, too can not believe he is still a free man. I don't think he should have been allowed out on bond. I do not see why anyone would think his victims would "cry wolf". What would be the reason? Why would their blood be in his apartment?! Because he RAPED THEM! Sicko! Pre trial conference is set for March 27, 2012. I can not wait to follow this and see the awful sentence he gets. But his parents have so much money, I wouldn't be surprised if he got out of it somehow. Gotta love our judicial system!

I went to school with this scum bag as well, even "dated" in school at a very young age though. What I remember was he was very pushy... Him being out on bond after these crimes are sickening !!! That in itself should be a crime! But those of you who know the family and towns in which he's from know money talks!!! That's the bottom line unfortunately. I hope he rots for these crimes because otherwise he will most likely do it again and it may be worse....

James River Assembly has enabled this individual too long. When you praise Pokemon, homosexual High School music teachers, and the James River Cult, things like this will surface. He reminds me off some of the Ozark Police officers.

Yeah this guy has always been a creep...even BEFORE steroids. In middle school, he tried putting his hands down my pants at a school function. I hope he gets raped in jail!

To the individual who blames James River Assembly (now known as James River Church) I used to think like you...I even half-jokingly referred to it as 'the cult'. But last spring I attended a service there for the first time and I realized that all of the things people say were based on ignorance. You are spouting the same ill-informed nonsense that so many people in this area do - myself included until I actually ventured to find out for myself. They do not espouse any of the things you mention, but are a warm, welcoming church that actually teaches directly from the Bible. Also, I am quite familiar with the choir director you directed your comments toward, and as the parent of one of his students during his tenure at Ozark, saw firsthand the amazing things a dedicated teacher can do. I'm not sure how you make the leap from a homosexual teacher to heterosexual rape, but I'll just toss that in the pile with the Pokemon and the Ozark Police and file it under 'huh?' because none of it seems relevant to the topic anyway. No person, no family, no church, no parent is perfect, but to place blame on anyone other than the person who commits the crime eliminates something that is sorely missing in our society... personal responsibility. My sympathies to the young women who were victimized.

what position do you hold at James River?

What staff position do you hold at James River?