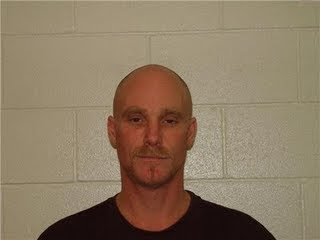 The man who escaped from the McDonald County jail yesterday has been captured in Noel.
Sheriff Robert Evenson says that about midnight last night a Noel police officer unknowningly approached Salwasser in the parking lot of a local filling station after recieving a suspicious person report.
Salwasser immediately bolted from the officer, then drew a handgun and pointed it at the officer. The officer fired two shots at Salwasser before he lost sight of him.
McDonald County Sheriff's Deputies, Noel Police, Missouri Highway Patrol, as well as officers from several other jurisdictions conducted a manhunt for Salwasser near the Tyson Foods Plant in Noel for about four hours.
Cops found Salwasser hiding in a wooded area not far from the Tyson plant and he was taken into custody without any further incident.
Salwasser, who was transported to the McDonald County Jail, is being held on forgery charges in additionon to the charges related to his escape.
Posted by Kathee Baird at 8:25 AM