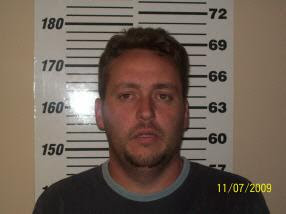 Authorities in Webster County have charged a man for robbing a pharmacy yesterday (11-06-09.).

Cole says deputies and Marshfield police officers took Stringer into custody a little after midnight last night at the home of a relative in Webster County.

Stringer, who has been charged with first-degree robbery, is in the Webster County jail on $250,000 bond.
Posted by Kathee Baird at 1:41 PM