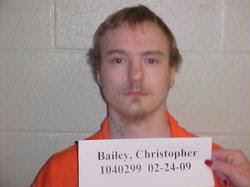 An inmate at the South Central Correctional Center in Licking died at the prison yesterday.

Bailey, who was serving a four year sentence for burglary out of St. Francois County, had been an inmate at the prison for a year.

An autopsy is being conducted to determine the cause of Bailey's death.
Posted by Kathee Baird at 7:31 AM

This was my cousin. He was murdered. It is a horrible ordeal. I don't think the prison is doing all they can to correctly handle the case.

His birthday was today and he was supposed to get out in February. He was the father of two children and was planning to get married.

My email addresses are:

What was the cause of death

I never learned the COD.