A Springfield man is in a Christian County courtroom today for a fire that destroyed a popular Ozark attraction in 2006.

Josh Pahl, who was an employee of the Doennig Hay Swings south of Ozark, is accused of allegedly torching the business that enveloped all five buildings and killed some animals that were kept on the property.

The popular venue was known for its giant hay swings, hayrides, paintball games and petting zoo.

The family business began small and developed into the size of a small town over the years. 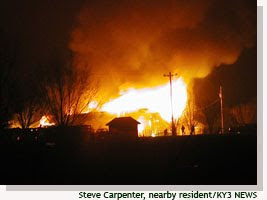 It was a big hit with Christian groups and received national attention from travel writers from across the country who stumbled across the business while they were covering Branson attractions.

After an outpouring from the community wanting to see the swings return, the Doenning family rebuilt the business at another site in Ozark.

Pahl, is also facing theft and burglary charges not related to the arson case.
UPDATE W/ VERDICT 6:48 p.m.:
The jury got the case at 5:42 p.m. and came back with a not guilty verdict in less than an hour.
Posted by Kathee Baird at 9:02 AM