Benton County, AR Man Has Been Charged With Attempted Capital Murder Of Deputy: 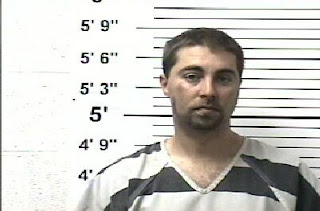 A Benton County, AR man has been charged with attempted capital murder of a law enforcement officer in Carroll County, AR.

Carroll County authorities say that thirty-two year-old James Correy Wilk of Gravette was arrested by Cpl. Joel Hand this past Tuesday for allegedly driving drunk and driving on a suspended license when his pickup truck ran off Highway 62 and slammed into some trees..

While Hand was writing notes for his report he heard some commotion coming from the back seat of his patrol car and when he turned around he saw that Wilk had slipped out of one of the handcuffs and had his assault rifle.

The deputy was able to get Wilk, who had chambered a bullet in the gun, out of the vehicle and threw him to the ground, causing the gun to fly out of the mans hands.

There has been no bond set for Wilks, who is being held in the Carroll County jail.
Posted by Kathee Baird at 8:43 PM