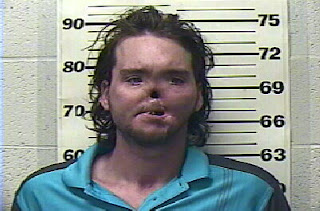 Authorities in Baxter County, AR, responded to an 9-1-1 call a little after 4 this afternoon (10-26-09)from a woman who said her husband Jason Marshall (a.) had assaulted her with an axe.

A short time later, a second 9-1-1 call was received from the victim stating she and her children had managed to escape but needed medical attention.

The victim drove her vehicle to the intersection of CR 46 and US Hwy 62 where she met with Sheriff's Deputies and ambulance personnel from Baxter Regional Medical Center.

Both the victim, 41 Year old Elizabeth Ann Marshall, and her 9 year old son were transported by ambulance for injuries received during the altercation.

Corporal Mike Holland and Deputy Mike Day responded to the residence and made contact with the suspect, 29 year old Jason Thomas Marshall, the husband and father of the victims.

At the Detention Center, Mr. Marshall continued to be combative, causing damage to the booking area of the jail before he was placed in a holding cell in restraints.

Based upon statements and physical evidence found at he scene, Officers were able to determine that after an argument broke out between Jason Marshall and his wife, Mr. Marshall became violent striking his wife in the arms, head, back and pelvic areas.

When the 9 year old son attempted to help his mother, Marshall allegedly threw the boy to the ground and slammed his head against a wall.

Elizabeth Marshall, her 9 year old son and her 16 year old daughter, managed to escape out of the house and to her vehicle outside.

Jason Marshall followed, picked up an axe and swung it at Ms. Marshall, barely missing her and striking the vehicle. The force was such it left a large impact area on the car.

Mr. Marshall is being charged as a Habitual Offender because of numerous past felony convictions. He has served time in the Arkansas Department of Corrections because of a previous conviction of aggravated assault on his wife when he attacked her with a knife.

Kathee, do you know what happened to this man that caused his disfigured face? Was just wondering if his violent behavior is not somehow related. Either physiologically or psychologically.

Mr. Marshall apparently attempted to commit suicide by shooting himself several years ago according to Sheriff Montgomery.

I am concerned for his safety, and that of his family's,if he gets out of jail without receiving some sort of counseling to help him with his anger issues.