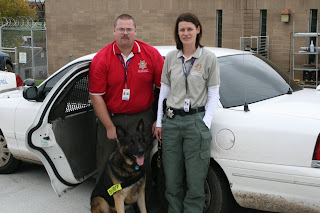 A woman who went missing from her rural Republic home late Tuesday night has been found safe.

Lawrence County Deputy Chad Garoutte and his K-9 partner, Magnum, along with Detective Melinda Mitchell found fifty two year-old Nancy Dickerson lying unconscious in some brush about a mile and a half from her home late yesterday evening (10-27-09).

After being revived, Dickerson, was taken to a Springfield hospital for treatment of exposure and a leg injury. She was reported missing by her husband.
A news release from the Lawrence County Sheriffs Office says that Dickerson, who had not been feeling well and was attempting to sleep in the living room, left her house to go for a walk, became disorriented and slipped and fell. She told officers that after she fell was unable to get up, according to the release.
Posted by Kathee Baird at 9:03 AM