Print
Email
Share
Republish
By Kathee Baird
Joplin, Mo.-A woman from Hootentown charged for the 2012 death of Carl Anderson was sentenced Thursday (11-20-14) in Joplin where the case was moved on change of venue.
Teri Dean-Morrison will spend 23 years behind bars for her part in Anderson’s death.
Anderson was last seen February 23rd at a gathering at Dean-Morrison’s home at 263 Akita Run near Hootentown. Dean-Morrison told deputies she dropped 46 year-old Anderson off at his home near Highlandville.  Carl’s mother, Ruby Stutesman, told investigators that wasn’t true and she filed a missing person’s report on her son on February 25th.

Investigators found signs of a struggle inside Teri’s mobile home when they executed a search warrant.  There were remnants of blood on a ceiling fan in a bedroom.  Carpets and windows had been replaced and walls had been painted, according to search warrant returns.

When Eugene Crider, 45, entered an Alford plea to second degree murder in March, Stone County prosecutor Matt Selby introduced a statement of facts that Crider agreed would have been enough to secure a conviction.
Selby says a fight over an eight-ball of meth led to Anderson’s murder.  Dean Morrison believed that Anderson stole the meth from her earlier that day and hid it in a storage shed on his mother’s property.
Cheryl Crawford, who lived with Dean-Morrison, says Anderson was being beaten when she returned home from an outing.  Dean-Morrison demanded the combination to the lock where she believed the drugs had been hidden while Anderson was being beaten. 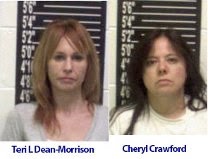 Armed with the combination Crawford drove Dean-Morrison to Ruby’s property.  Surprised that someone other than her brother was in the shed, his sister Vicky Lewallen made note of the event and helped the women open the door.
Lewallen says she saw Teri grab what appeared to be an “eight ball” of methamphetamine from a shelf in the shed.  Crawford says that Teri wasn’t satisfied with the amount of meth recovered and when she got back to her house Teri began yelling at Anderson, who was lying injured on the living room floor, and demanded that he answer her questions.
Selby says an argument over money may have boiled over as well and that Crider, who was holding an ax handle, began beating Anderson with it. Cheryl Crawford left.
When Cheryl met up with Teri later that night Dean-Morrison told her that they needed to pick up cleaning supplies on the way home.  When they returned to the Akita Run house doors and windows were broken, there was blood on the walls and ceiling and Anderson lay dead on the floor wrapped in a comforter.

The trio then loaded Anderson’s body into Crawford’s van and drove his remains to the property of Dean-Morrison’s employer and former boyfriend Earl Kearney.  There they burned the body and scattered the remains around the vast property.  It was in a pond on the property that investigators found Anderson’s charred liver.
As part of Dean-Morrison’s plea agreement the state agreed to not seek more than 23 years as a sentencing guideline.
At one point during the sentencing Dean Morrison’s attorneys Kristin Jones and Brady Musgrave requested to withdraw the Alford plea Dean-Morrison made earlier.  An Alford plea is on where the defendant does not admit quilt but concedes that the state probably has enough evidence to secure a conviction.

"We had hoped the judge would be more lenient given Teri's lesser role in the offense and Gene Crider's overwhelming manipulation and control," said Jones.  "I believe [the] Judge listened to us and carefully considered our argument but in the end he could not get past the particularly bad facts of the case and its effect on Carl Anderson's family."
Federal charges of felon in possession of a firearm that were filed against Dean-Morrison are to be dismissed, according to Selby.
“I think it’s a fair a good resolution,” said Stone County Prosecutor Matt Selby.  “She’s going to be in prison a long time.”

Eugene Crider was sentenced to life in prison for his role in Anderson’s “senseless” murder.
Cheryl Crawford pleaded guilty to two counts of tampering with evidence and was sentenced to eight years.
Eugene Crider’s girlfriend, Krystal Buras, who was also charged with felony tampering, was placed on probation after she pled guilty to amended misdemeanor charges of tampering.
Posted by Kathee Baird at 4:55 PM