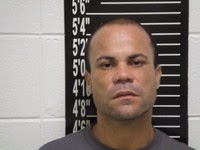 Galena, Mo.- A man is facing charges of felony sodomy for allegedly sexually assaulting a job trainee late last month.
Court documents state that the male victim, who was training as a housekeeper, had fallen asleep on a couch at Ozark Mountain Resort in Kimberling City on July 23rd.  The victim told authorities through a Spanish speaking interpreter that he was awakened when Angel Padilla-Ayala was performing oral sex on him.
The manager of the resort contacted Felipe Rodriguez, the manager of Good Hope Labor – Polar Bear in Branson.  After Padilla-Ayala allegedly admitted to the crime he was terminated, according to the probable cause statement.
Padilla-Ayala, 32, is being held in the Stone County jail on a $50,000 cash only bond.
Posted by Kathee Baird at 4:49 PM