Murder Trial Postponed For A Year: 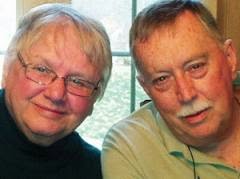 It will be another year before a jury hears the case of the brutal murder of an elderly couple from Michigan who were vacationing at their son's home near Lampe last year.

In January of 2013, Brian and Susan Brooks were found bludgeoned and stabbed to death inside the lakefront home.  Two teenagers, Anthony Zarro and Christopher Allen, who escaped from the Lives Under Construction boys ranch, are facing first-degree murder charges in the couples deaths.

Zarro's trial was scheduled to begin next month, but his attorney Tom Jacquinot asked Judge John Sweeney for a continuance last week.  That motion was granted and the trial is now scheduled to begin on June 22, 2015 in Newton County where the case was moved on a change of venue.


Jacquinot cited a heavy case load and the amount of time needed to gather evidence in this case, "which will be handled like a death penalty case."

Stone County prosecutor Matt Selby and Jacquinot are seeking some sort of guidance on both Zarro, who was 17 at the time of the double homicide, and Allen 's (who was 16,) cases because both were juveniles at the time the murders were committed.

Currently the law states that juveniles convicted of first-degree murder are not subject to a life without parole sentence or the death penalty.