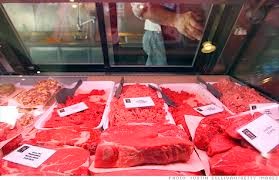 Expect sticker shock when you go to the grocery store to pick up some hamburger.

Beef prices have skyrocketed in recent months and are at their highest since 1987.  A dwindling number of cattle and growing demand from other countries for U. S. beef have helped drive the cost of ground beef up to about $3.55 per pound.


Experts say prices are expected to climb for a few years as cattle producers rebuild their herds. Farmers in the southwest and midwest have been hit hard the last few years with droughts and will need enough rain to keep pastures green in order to feed their herds.
California, which is a major producer of milk, eggs, fruit and vegetables, is suffering from extreme drought conditions now.  Prices on those products are expected to rise as well.
Some shoppers say they are turning to chicken or pork, but those prices are expected to climb too.
Some independent restaurants have increased their menu prices or switched to smaller steaks to combat the price spike.
An economics professor says chain restaurants combat the price increases by buying in bulk.
Posted by Kathee Baird at 4:02 PM