Authorities in Springfield are looking for a man who abducted a little girl in west Springfield late Tuesday (02-18-14) afternoon.
A witness to the abduction on the 3200 block of West Lombard [which is near Grand and West Bypass] says a man called 10 year-old Hailey Owens about 4:48 p.m. to his truck to ask directions to a street before he grabbed her and threw in his truck.

Hailey's mom told investigators that she has no idea who the man is.

Hailey, who lives on Page Street, was walking to a friend's house on Lombard when she was snatched from the street in broad daylight. 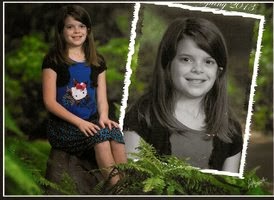 Authorities need your help in locating the person who was driving what is believed to be an early 2000's gold or tan Ford Ranger pickup truck that was last seen headed south on Golden Avenue.  The truck bears Missouri plate IYF 454 or IYS 454.  The suspect could be a 45 year-old man with gray hair and an unshaven face.
Hailey is 10, 5-foot-2, skinny, with sandy blonde hair and pierced ears.  She was last seen wearing blue jean shorts and purple sandals.


If you know where Hailey is or who may have abducted her call 9-1-1.

A suspect was taken into custody and booked on suspicion of kidnapping after police located the vehicle at a residence in south Springfield, but the search for Hailey continues.

Police say if they haven't located her by 6:30 a.m. they will hold a news conference.


A reporter who was at Hailey Owens' home said they witnessed police come to the house and notify the family that a body had been found.

Craig Michael Wood, 45, has been booked on suspicion of first-degree murder and kindapping.

Springfield Police Chief Paul Willliams said in a news conference that cops, acting on a tip, found Williams inside the truck about 8:30 p.m. at1538 East Stanford.  Wood allegedly told cops that there was a crime scene inside that residence when he was apprehended.

About 40 police officers honed in on that crime scene where Williams said "they found evidence of a crime that had been committed."

Not long after Hailey went missing authorities swarmed an area in Ash Grove looking for Wood, who according to public records, has a residence there as well.

Online court records in Missouri show that Wood pled guilty to a drug  charge in Greene County in 1990.  He was placed on probation and ordered to complete drug counseling.

Wood, has been employed by the Springfield school district since 1998.  An online search at Pleasant View Middle School reveals that Wood worked as an athletic coach and paraprofessional for In School Suspension.

An official statement from the school district says, "His employment has been suspended until this matter is resolved."

Investigators have covered the front of the house Wood was found at with a tarp and a pickup truck parked in the driveway was towed away for forensic testing.


The FBI and Highway Patrol are assisting city police in the investigation.

Another update from police is schedule for 11:00 a. m.

Family members have confirmed to KMBC that Hailey's remains had been recovered.

Springfield police chief Paul Williams says the suspect in the kidnapping and murder of a 10 year-old girl won't speak to them.

Craig Michael Wood, 45, asked for a lawyer while he was being questioned about his involvement in Hailey Owens' murder.

Wood allegedly told investigators that the little girl was dead inside his residence at 1538 East Stanford after he was apprehended.  Authorities searched the property of another residence near Ash Grove associated with Wood as well, but centered their investigation on the Springfield property after there was no movement at the Ash Grove property.

An amber alert was issued for Hailey at around 7:00 p.m.--about two hours after witnesses reported a man driving a Gold Ford Ranger had snatched the little girl from Lombard Street on the city's west side.

Williams says those witnesses did everything right and their information regarding the license plate of the suspect vehicle was instrumental in capturing Wood.

At an 11:00 a.m. news conference, Williams said authorities arrested Wood about 8:30 p.m. as he returned home, presumably from a nearby Laundromat that was also being processed as a crime scene.

FBI agents, police and crime scene tape surrounded the Dutch Maid Laundry near the Missouri State campus early this morning. An attendant says authorities concentrated on two dryers and a washer that Wood allegedly used.  Those investigators were seen carrying bags and boxes of potential evidence out of the business before releasing the crime scene about 10:30 a.m.

Wood's arrest has stunned colleagues and parents at Pleasant View Middle School.  He has been employed by the Springfield school district for the last 15 years.  He began his career with the Springfield school district as a substitute teacher in 1998 and was hired as a full time football coach and paraproffessional (In School Suspension teacher) in 2006.

Lot's of things coming out in the Oklahoma news reports indicating they think the suspect is headed there. Hopefully, that means they know who this guy is. Prayers for the family and Hailey.

Why, why, why . . .
That poor child and her poor family. A ten year old child should be able to walk down the street to her friend's house in broad daylight safely. To her family, please know that this was the result of a sick, sick person. Mental illness hurt your baby. This is not mom and dad's fault. This is the fault of the perp. RIP sweet baby.