Law enforcement officers in Missouri and Arkansas are trying to find two men who kidnapped a disabled woman from her home near Washburn last Friday (01-03-14.)

Barry County Sheriff Mick Epperly says the men, who had bandannas on their face, broke into the woman's house on Trent Road about noon in McDonald County and demanded prescription drugs and money from her.

He says after they ransacked her house, the woman told the men to take her car but they kidnapped her and threw her into the truck.  They then drove to First State Bank in Cassville where she gave them her personal identification number.

The first transaction the men attempted at the ATM did not go through because the woman's Social Security check had not yet been deposited.  About 20 minutes later, the men successfully withdrew $350.

At one pointm while she was in the trunk, the terrified woman was able to open the trunk. When she refused to shut it, the men pulled over, hit her a few times and slammed it shut.  The men pulled eventually dumped her on Farm Road 1180 south of Eagle Rock, possibly in Arkansas.  From there she walked a mile in her bare feet in the cold weather to find help.

The men then drove to Berryville, Arkansas, where they made an additional four $200 withdraws from the woman's account before they ditched her car in the Roaring River arm of Table Rock Lake.
Epperly says he has contacted federal authorities and the men could face interstate kidnapping charges if the woman was dumped in Arkansas.
"We've got some good leads on this," said Epperly.
A conservation agent recovered the car, which is being processed for evidence, and authorities are reviewing the banks security footage to try to identify the kidnappers. 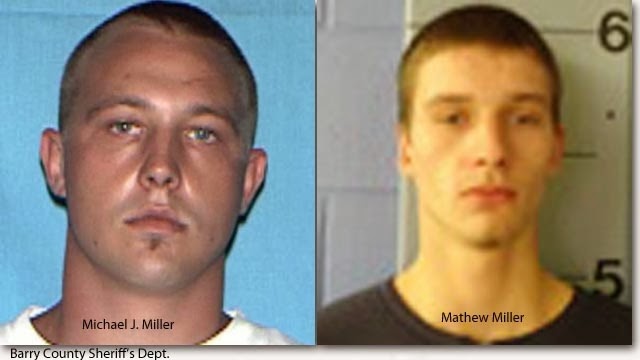 Two brothers from Eagle Rock have been charged in connection to the kidnapping of a disabled woman from her home in Washburn last week.

Court documents say the men were identified by surveillance video from a bank.  Michael Miller was identified by tattoos from a previous arrest.
Posted by Kathee Baird at 1:04 PM

I think they were arrested.

Yes, I knew....but I have been down for the count with a terrible cold.

Sorry for the delay!