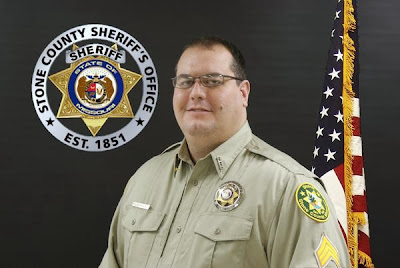 The Stone County Sheriff's Office was the recent recipient of a $5,000 Legacy Grant by the Skaggs Foundation and they will use the proceeds of the grant to educate children about the perils of drug use.
The D.A.R.E. program in Stone County has been headed by Deputy Justin Scroggins, who is also a patrol officer, for the last eight years.
D.A.R.E (Drug Abuse Resistance Education) was established in Los Angeles in 1984 in an effort to thwart an increase in illegal drug and gang activity and it spread worldwide.  Those who participate in the program sign a pledge not to use drugs or join gangs.
Scroggins says D.A.R.E. education doesn't just focus on drugs and gangs anymore, but it also educates students about bullying and helps kids recognize trigger factors that cause disruptive behavior.  "I teach them that they are accountable for their actions."
"D.A.R.E. is targeted for fifth graders," said Scroggins.  "This program is a necessity.  At some point in their life, 90 percent of kids will be tempted or offered drugs...this not only give them the confidence to say no, but different ways to do so.  They need to know what drugs can to do their bodies so they can make informed decisions so they can be successful in their life."
Scroggins teaches classes once a week for three months out of the school year in Crane, Blue Eye, Galena and Hurley.  A resource officer in Reeds Spring is responsible for teaching kids there.
The $5,000 donation to the program will help Scroggins buy educational material and t-shirts with the D.A.R.E logo for the 400 kids who take part in the program.  The annual budget for the program is usually about $4,000, so the donation from the Skaggs Foundation will allow Scroggins to do some things that he has always wanted to do.  "I think I will be to do some really fun dynamic things with the kids like field trips and things like that," he said.
He says the department usually picks up part of a portion of a student's ticket price to the Dixie Stampede that is used as an incentive to reward kids for their involvement in the program.  "We might be able to cover the full price this year with the grant," he said.
Another wish on Scroggins list is to have the red and blue light bar on the D.A.R.E car replaced.  It had to be removed and used on a patrol vehicle due to budge constraints.
Scroggins said his best students are the ones who live in homes where drugs and violence are common.  "They've seen the bad stuff and they really want to be the one who stops the cycle."
"It's all about the communication it opens up between kids, parents, officers and teachers."
All of the 18 recipients of the Legacy Grants must use the proceeds for health and wellness programs for citizens in Stone and Taney counties.
Posted by Kathee Baird at 5:01 PM