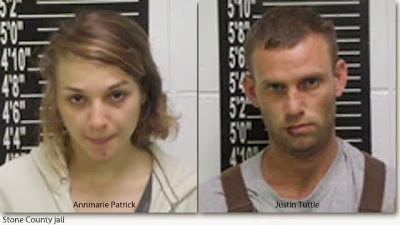 The preliminary hearing of two suspects accused of killing the father of a young boy last month near Lampe will be held on November 6th.

Very little information has been released in the stabbing death of 28 year-old Daniel Martin who was found floating in Table Rock Lake on September 29th.  Authorities believe Martin was killed three days before his remains were found by hikers and was dead before his body was dumped in the lake.


Prosecutors say Martin's girlfriend, Annmarie Patrick, and another friend, Justin Tuttle, are responsible for the homicide.

Another man, Daniel Compton, who is charged with tampering with physical evidence, will have his preliminary hearing on the October 29th.  Authorities allege that Compton dumped Martin's vehicle down a ravine in Arkansas after the murder.


In the last year and a half, seven people have been charged with murder in Stone County.