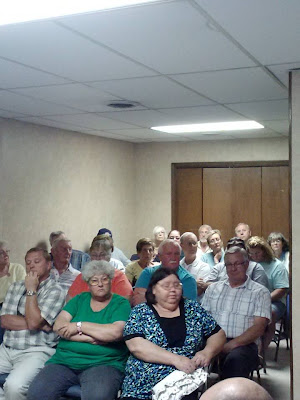 An overflow crowd attended the Board of Alderman meeting in Crane Monday evening to address the hot button issue of proposed alcohol sales at "city sanctioned" events.

The majority of citizens who attended voiced concerns regarding a bill that was proposed to allow the sales at sponsored events in the city park.  The city does not own the park - it leases it for $1 a year from the Broiler Festival committee.

Former police chief Bruce Belin, who spoke on behalf of the Minister's Alliance, said over 100 people had signed petitions urging lawmakers in the city to strike down the proposed ordinance.

Over a dozen people in attendance urged board members to quash the bill.

Sharon Ellis moved to Crane from a larger city about 10 years ago.  "We are so very lucky to have the park we have."  She suggested bringing pie, jam and livestock judging to the annual Broiler Festival.  "We're a rural community, don't bring alcohol---it just doesn't fit," she said.

Business owner Joe Rodriguez told board members that he saw "no benefits" to the proposal.  "If you pass this you might as well take the city park out and make it in to a bar so families know they can't go there anymore."


Board members listened to citizens concerns for over an hour before they took a vote on the matter.  All of the members voted no and the measure was defeated.

There was one member in the crowd that was neutral on the matter and that was Crane resident Pete Hill.  "I'm not for or against it," he said.  "In the four years I've lived here I've seen the city go downhill...I just want to see more people get involved in city government."
Posted by Kathee Baird at 3:23 AM