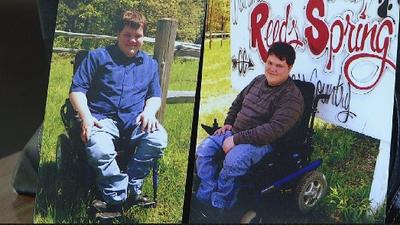 A motorized wheelchair that a Reeds Spring teenager uses everyday was stolen from in front of his aunt's Reeds Spring home on Sunday ( 10-28-12) night.

Nineteen year-old Ryan Kraus was born with spina bifida and was using a lighter weight chair when he went to see Carrie Underwood perform in Springfield.

Connie Fausett, Ryan's aunt, said her dogs began barking about 9 p.m. but she thought the noise she heard came from inside the house and told them to be quiet.

Kraus used the blue and black Invacare Storm Series motorized wheelchair, which was less than a year old, to take him most places around his home....even the nearby animal shelter where he volunteers.

Kraus says he likes to hangs out at a nearby animal shelter where he helps do the laundry and pets animals to keep from being bored, but he can't do that now because of the limitations of the lighter chair he is left with.

If you have any information about the theft of Ryan's wheelchair you're asked to call the Stone County Sheriff's Office at 417-357-6116.
Posted by Kathee Baird at 6:21 PM