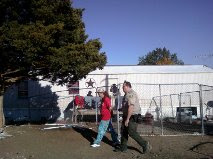 For the second time in less than a month, a woman from Cape Fair was arrested on charges connected to animal abuse/and or neglect.

Last week prosecutor Matt Selby charged Amy Allan, 50, with two counts of improper disposal of an animal after authorities found several dead horses that had been drug into the woods to rot on the woman's property at 485 Puma Ridge Road.

Allan was already facing two counts of animal abuse after neighbor's reported that she was neglecting horses and dogs kept on her property.

On October 16th, Stone County deputies and The Humane Society conducted a raid to rescue animals on Allan's property.  When authorities arrived to execute a search warrant, they were informed that another horse had died the night before.

Authorities found three dead horses, ten live horses, fifteen dogs, five cats, a duck and a chicken in the raid.  Most of the dogs were kept in cages or chained to makeshift shelters like camper shells.

When Deputy Nathan Boone went to Allan's Puma Ridge property on October 2nd to investigate the death of another horse, he found "several horses running loose on the road and on the property." He also found a horse, "that had been deceased for some time," lying on its side not far from a corral behind Allan's house.

Allan told Boone that the horse had died five days earlier after it became entangled in some fence wire. 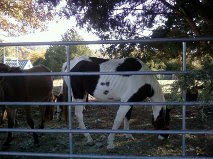 Keith Johnson, an investigator with The Humane Society, has been in contact with Allan since March and has witnessed "a steady decline" of the animals Allan had in her possession.  At one point, Allan moved the animals from Greene County in an effort to thwart investigators.

During the raid, authorities found a dead dog inside Allan's mobile home and found that all the animals on the property "appeared to be underfed and malnourished."  Sheriff Richard Hill said a dead dog found inside the mobile home was wrapped in a blanket. He said he did not know how long the dog had been in the house, but said “it smelled.”

"We’re seeing a lot of very thin horses," said Johnson as he surveyed the property. “They are showing ribs and hip points. They’re in pretty poor shape.”

Johnson said he talked with Allan on several occasions and told her it would take approximately $5,000 a month to properly care for the horses.  "She said she could do it," he said.

At a news conference Detective Matt Maggard said Allan does have the means to properly take care of the animals as she lives on a trust provided to her as an heir to the Allan Medical Rents fortune.

Maggard said authorities had given Allan the opportunity to voluntarily surrender the horses and at first she was complying with the request with the surrender of four horses.  However, Allan told Maggard that after speaking with her attorney Dale Wiley she was going to keep the remainder of the animals on her property.

Allan told investigators that she had contacted a rendering plant about collecting the dead horses, but they would not pick the animal carcasses up.  She said she had planned to contact someone with a backhoe to come bury the horses, but had not yet done so.

Maggard said an investigation by authorities in Greene County is ongoing and Allan could face animal abuse charges in that county as well.

Johnson said the animals that could be rehabilitated would be put up for adoption at a later date.

Allan is scheduled to appear in court Allan on November 17th.  A condition of her bond states she cannot have more than two horses in her possession.
Posted by Kathee Baird at 1:15 PM

Is this the "psychic" Amy Allan from paranormal TV fame? I know this may be a silly question but when I saw the mugshot photo they sure look alike..