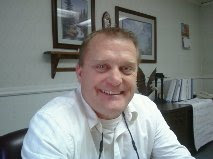 Forty seven year-old Robert "Bob" Savage came back to the town he grew up in to take over as city administrator in July.

Savage, graduated from Crane High School in 1983 and went on to receive a degree in Nuclear Engineering from the University of Missouri at Rolla.  Savage, who commanded a submarine in the Navy, received an MBA from Burnell in 1994.

He worked at Texas Instruments in Dallas as a "classified engineer" for a few years after leaving the Navy.

Savage says there were no surprises when he took over.  "I was pleasantly surprised to see that the financial health of the city was good when I came on board."

Bringing new businesses to town is one of the goals Savage has set for himself.  ""We would be happy to take any industry that is willing to come to Crane."

He says that there is one gem in the city's crown that is underutilized...the city park.  Savage says he would like to see more festivals utilize the city's "wonderful asset."

Savage says Mayor J. Collin Brannan, who is a childhood friend, has done a "great job" making sure firefighters and police have the equipment needed to protect the city.

He and his wife, Michelle, have two grown children.
Posted by Kathee Baird at 3:16 PM