Twenty one year-old Steven Thomas Pyykola was charged in October of 2009 for his part in the spree killings of Jeffry, 51 and Glenda Smith, 48, and Zach Porter, 24, in Lebanon.


Joshua Reyes, Benjamin Stidham and Jacky Wong were also charged in the triple homicide.  Authorities say Reyes was seeking revenge against his ex-girlfriend Miranda Smith when he recruited Pyykola, Jacky Wong and Benjamin Stidham to help kill the girls parents and new boyfriends. 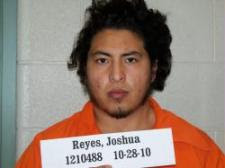 Reyes pleaded guilty in 2010 and was sentenced to life without parole.


Wong pleaded guilty in 2011 and is scheduled to be sentenced in December.

Stidham's case is in legal limbo at this point.  He was sixteen years-old at the time of the murders and the Supreme Court recently ruled that offenders under the age of eighteen at the time of the commission of a crime cannot be sentenced to life without parole or the death penalty.

Pyykola was found guilty about 3 p.m. of three counts of first-degree murder and armed criminal action.  He is scheduled to be sentenced November 15th.

It appears Ben Stidham's trial is over too - plea deal for a lesser charge of third degree assault and one year in jail. Is this right? Check -