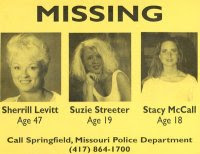 Next month will mark twenty years that three women vanished from a home in Springfield.

Sherill Levitt, her daughter Suzanne "Suzie" Streeter and Stacy McCall disappeared from 1717 E. Delmar in the early morning hours of June 7, 1992. Streeter and McCall had graduated from Kickapoo High School the night before.

The blue ribbon panel provided feedback for future follow-up for SPD investigator's during the three day presentation on the disappearance of "The Three Missing Women."

"We still believe someone in this community has key information that will lead to this case being solve. This case has received a large amount of publicity, and we have received thousands of tips. In the beginning there was a lot of information released, and some miss-information that was generated in the public, that may have kept someone from calling in or contacting us with valuable information," said Lt. Millsap.

Sadly this will just start more BS about the garage and we will move nowhere.

The perps are loving the garage talk though. Guarantee that.

Was an investigation of the 3 missing women ever done on the following? 1. Stacy McCall worked at Springfield Gymnastic's and 2. A few years later another employee at Springfield Gymnastic's was abducted, forced to drive to Taney county after receiving cigarette burns on her face and arm she was able to get away. Both worked at the same place. Both young women. Both abducted. Was there any connections??