The two deputies who arrested Crane alderwoman Jessica White on May 5th have filed a lawsuit for defamation of character.

Attorney Richard Crites, who is also a reserve deputy for the Stone County Sheriff's Office, says his clients, Deputies Taylor Jenkins and Brandon Flack, were only doing their job when they were assaulted by Jessica White.  White's husband, Jordan, and her father-in-law Donny "Stick" White were charged for interfering with an arrest.

The attorney for the Whites, John Dale Wiley, who is also named in the defamation lawsuit, issued a statement last week to the news media saying the arrests of the White's were uncalled for and they were the victim's of police brutality.

To further support his claim, Wiley set up the website www.stonecountypolicebrutality.com that shows video that was taken during the melee.   That website has gotten over 10,000 hits in the last week. "I have information that Dale Wiley either edited that video or he had the video edited.  We would like to see the whole unedited tape," said Crites.


Crites says the White's were returning from a Cinco de Mayo party when they encountered police in their driveway.  Brittany Barnett, who is Jessica White's cousin, had been pulled over for a traffic violation and her husband, Thomas, was being arrested on a municipal warrant out of Crane when the White's arrived. 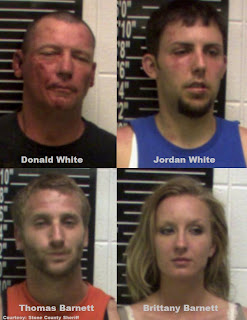 "My clients had the right to be in that driveway.  Brittany Barnett pulled in there - they didn't need probable cause...they had reasonable suspicion.  She (Jessica White) reacted because she was drunk. Alcohol and stupidity go like bacon and eggs,” Crites said. “I don't care what Dale Wiley says, you don't have an excuse to go up and hit somebody in the head that's a cop.  Dale Wiley wants everyone in Stone County to believe that Stone County deputies are brutal.  It's all about money."

Crites also believes Wiley's motives are political.  "Dale Wiley is probably going to run for prosecutor in the next election, and he is also trying to see to it that Doug Rader is elected as Sheriff this time."

"He (Wiley) slandered my clients and is trying to get his client's off and make money.  Bottom line, my client/s had a job to do and they were assaulted when they were on duty."
-

As of today (05-16-12) the White's have not filed a lawsuit against either of the deputies or the Stone County Sheriff's Office.
-
In a news release from Wiley dated May 16th he says, "Jessica in her roles at Stone County National Bank and as an Alderwoman is one of the most visible faces in Crane.  Sheriff Hill continues to insist my clients were intoxicated, however none of the deputies did any checks to determine whether or not they actually were.  If there were any question of my client's intoxication, the deputies would have documented this through testing which was not done at the scene or at the jail.  My clients were not intoxicated.

The back and forth between the sheriff's office, Crites and Wiley has to do with the video and how it has been edited.

Wiley also said in the release, "The video that we presented on www.stonecountypolicebrutality.com was compiled.  The video was stopped at certain point to add emphasis.  But there are no missing pieces. Nothing has been removed.  You see all of both videos, one from the driver of the stopped car (the one which contains video of the traffic stop,) and one from Dustin White (the video which best shows the action of the officers.)

I have tried criminal and civil trials for 14 years, and have found that juries in southwest Missouri do an excellent job of getting to the truth in any case,"  said Wiley.  "This is where I prefer to try my cases.  If Sheriff Hill continues to feel the need to try this case in the press, I may be forced to comply.  If not, I look forward to seeing them in court."
Posted by Kathee Baird at 4:48 PM

Ha ha ha !!! As I said before, all about money. Good for the Officers !!! I hope they win, and I hope the 4 tards involved lose everything they own!!!! Dumbasses, and boot her off city council too ! Get 'em Crites !!!!!

I am SO sick and tired of everyone saying Jessica was drunk. She wasn't! The deputies nor the jail breathalized her and if they had it would be in their report! Crites needs to make sure he's got the right information before looking like a dumbass. And Brittany wasn't even driving like he's saying. Wow, nice work Crites! NOT!!

iknow personaly that crites is as crooked as pres.nixon was.his m.o. is to hang out wit police and cause crap. then sue them when they file a complaint. he was the s.p.d.union atty.and it is sickening the hobbies he has. raciast greedy power hungry.wonder where he was on june 6 1992.