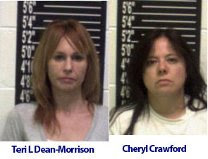 -
Preliminary hearings for two Stone County women charged with first-degree murder have been set for May 25th.

Teri Dean-Morrison and Cheryl C. Crawford are facing first-degree murder charges for the death of  Carl Anderson of Highlandville.

Anderson, who was 46 years-old, was allegedly last seen February 23rd at a gathering at Dean-Morrison's house at 263 Akita Run near Hootentown.  Dean-Morrison shared the home with Crawford and Eugene "Gene" Crider.


Dean-Morrison told deputies she took Anderson back to his home in Highlandville; Anderson's mother said he never returned home and she filed a missing person's report on February 25th.

According to the probable cause statement, cell phone records allegedly led authorities to obtain a search warrant for Earl Kearney's property at 55 Kearney Lane off of Highway OO near Kimberling City on March 19th.
-
"By examining the phone records and cross referencing the cell phone towers, it led Detectives to a property located on Highway OO in Stone County which belongs to Earl Kearney, a known associate of Teri Dean. The phone records showed that one or more of the three suspects spent a considerable amount of time at the property of Earl Kearney on the evening of Thursday, February 23rd and Friday, February 24th."

During a second search of Kearney's, who is a former boyfriend of Dean-Morrison's, property on March 21st authorities found human remains, which sources say were dismembered.  The remains were sent to the Missouri Highway Patrol crime lab and confirmed as Anderson's late on March 23rd.

Eugene Crider was charged with tampering with physical evidence in connection to Anderson's murder and was bound over for trial after waiving his preliminary hearing.  His girlfriend, Krystal Buras, is facing the same charge.  She is due back in court on May 16th.
Posted by Kathee Baird at 3:25 PM

Please dear lord Jesus let this sick ppl rot in hell And server a life sentence r.I.p Carl we all love And miss u.