A woman from Cassville has been convicted in federal court of conspiracy to commit murder and murder for hire.
-
Federal prosecutors say Katherine A. Mock, 58, of Cassville, conspired with Elain KayYoung, 57, of Novinger, to kill Young's husband, Melvin "Beau" Griesbauer, in November of 2006.

A week after Griesbauer’s death, Kathy Mock was arrested for his murder.

Two years after the homicide, Kay Young was charged with first-degree murder and armed criminal action in connection to her husband's death.

-
Mock and Young became friends through dog breeding, according to friends of the women.
-
When investigator's interviewed Mock's son, Thomas Ponder, he said his mother told him Kay Young wanted her husband killed and there was a $10,000 payment to anyone who would kill him.
-
Court documents say Mock first tried to recruit someone referred to as “K.P.” to kill Griesbauer for $6,000 and then tried to get another person referred to as “T.P.” to murder the man for $10,000.
-
Mock allegedly left her Barry County home on March 22, 2006, and drove to the couple’s home in Novinger, according to court documents. Those same records say she stopped along the way and purchased a ski mask at Wal-Mart in Republic.
-
On March 23, 2006, two years after Griesbauer and Young exchanged vows, and not long after  returning from Iraq, 43 year-old Griesbauer was found shot in the head near a barn on his wife's property.
-
Some evidence recovered at the crime scene included a knit ski mask, containing Mock’s DNA, and a box of latex gloves which belonged to Young.
-
On March 24, 2006, a friend of Mock’s, who was unaware of Griesbauers murder, drove her to a Joplin hospital for mental help. That friend told authorities that Mock told her, "Young had given her “several hundred (hydrocodone and acetaminophen) pills with instructions to take some of these, “to receive a short term in a mental hospital and avoid a penitentiary sentence.”
-
On April 6, 2006, Mock was taken into custody at the mental health facility where she reportedly checked herself in to “avoid prison time.”
-
Kay Young is a descendant of John C. Novinger who founded the Adair County town that bears his surname. It was on the founding fathers property that Melvin "Beau" Griesbauer was gunned downed after he completed his late-night shift at a meat packing plant where he made about thirty-five grand a year.

Kay Young had been married three times before she wed Beau at Fort Leonard Wood in 2004. In all three of her previous marriages she took her previous husbands last names....but not Beau's.

Some say it was because she knew that he wouldn't be around for long.
-
Griesbauer, who had served as an LPN/Army Reserve Specialist and survived a tour in the desert, was insured to the max. His wife told friends he did so to make sure she would be taken care of if anything happened to him.
-
Detectives found a Novinger family heirloom rifle, a 30-30 Winchester lying near Griesbauer's body, but it was at weird angle for a suicide and it immediately raised the neck hairs of investigators.
-
By all appearances Kay Young was a stellar member of her community. She was a school superintendent, a class sponsor and a beloved teacher. She fostered children and championed Christian causes.
-
She also made donations to local 4-H clubs in “memory of her mother” Celia Hammons who died in 2000.
-
When the original family homestead was given to Kay in the months preceding Celia’s death, Kay’s siblings said their sister had turned their mother against them and restricted visitation with her. 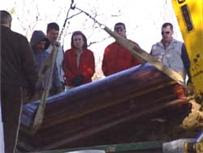 With the town talking about Beau's murder and Celia Hammons death, some people took their suspicions to authorities who exhumed Celia's body for testing. There has been no word on what those results revealed.
-
Both Mock and Young could be sentenced to life in prison when they are sentenced later this year.
Posted by Kathee Baird at 2:39 PM

I am so glad Mel finally got justice. We were in the navy together in Pensacola in the early 80's. I have been following this case for awhile, and frankly, could not understand what was taking the system so long.