Murder Charges Filed In Death Of Baby In Barton County:

A Barton County man is jailed in connection to the death of a four-month-old infant earlier this month.
-
Authorities were initially called to an apartment in Lamar on February 17th because Kaiden Michael Parker Stevens was not breathing. The little boy died February 20 in a hospital in Kansas City.  However, since the injury to the child occurred in Barton County it is the responsibility of the county coroner to have an autopsy completed.
- 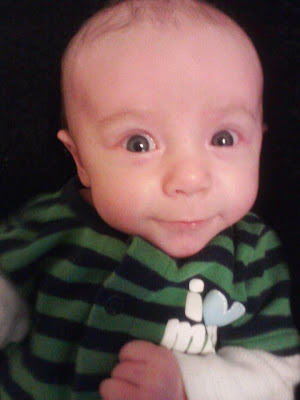 
According to the probable cause statement, Jonathan David Rector, 27, told police that he was watching the little boy and fell down the stairs with him.  When he was about to be given a polygraph, he said he couldn't lie and that he had shaken the baby "in a fit of rage."  Rector told investigators the "rage was connected to the stress he was experiencing."
-
Rector is facing charges of second-degree murder.  His bond has been set at $500,000.
-
UPDATE 12-5-12:

Rector pleaded guilty to amended charges of voluntary manslaughter in a plea deal. When he is sentenced early next year,  his sentence will be limited to 15 years in prison.

During a hearing Monday in Barton County court, Rector admitted he injured Kaiden Stevens by shaking him on Feb. 17 in what he called a fit of rage.
Posted by Kathee Baird at 8:34 PM

My comment is about the death of kaiden Michael parker Stevens. If David rector was feeling stressed then he should have placed the baby in his crib shut the door walked away and called in some help with the child. This baby did not deserve this. My prayers go out to the mother and the family of the child. May he rest in peace. I hope Rector learns his lesson while serving hard time and May god be with him. Im so sorry this happened because it shouldn't have. There are parenting classes for this reason.

I hope no one bails him out..that was my baby cousin he killed

I am so sick and tired of reading horrific stories about children being murdered by their caregivers. These people don't care...they are complete monsters! We have become too accepting as a society and it needs to stop now. Seems like our system figures out how to make things happen when it works to their advantage. I'm willing to bet the system could charge first degree murder with the death penalty when a child is murdered as well. Quite frankly, that's what needs to be done. No more 'fits of rage', 'stress issues', or 'blackouts' being used as excuses from the murderer. Don't you think this baby, and every other child beat to death is under 'stress'?! Come on people....why do we continue to send a message that killing kids is not the worst thing in the world to do?? It IS the worst, in my opinion.....

This little boy is gods gift, he looks adorable i would have fucked this guy up i can't believe tgis happened, fuck him hr deserves his time

"I'll lend to you a little while
A child of mine, God said...
For you to love the while he lives,
and mourn for when he's dead.
It may be six or seven years
Or forty two or three;
but will you, til I call him back,
Take care of him for me?
He'll bring his charm to gladden you
And - (should his stay be brief) -
You'll have his lovely memories
As solace for your grief.
I cannot promise he will stay
since ALL from earth return;
But there are lessons taught below
I want this child to know.
I have looked the whole world over
In search for teachers true;
And from the things that crowd life's lane
I have chosen you.
Now will you give him all your love?
nor think the labor vain?
nor hate Me when I come to take
this lent child back again?
I fancied that I heard them say -
"Dear Lord, Thy will be done.
For all the joys Thy child will bring
The risk of grief we'll run."
We will shelter him with tenderness
We'll love him while we may -
And for the happiness we've known
Forever grateful stay.
But should Thy Angels call for him,
much sooner than we have planned,
We'll brave the bitter grief that comes
and try to understand."

This was my ex husband. I really wish I never met him. Im sorry on behalf of the Stevens. I cant wrap my head around any of this, I just want justice served. People need to stop throwing punches at me asking y I ever married him...he was manipulative abd charming and worked like a professional abuser luring me into his trap. I hope he gets whats coming to him in prison.

Kaiden did NOT diserve this worth the crap! Kaiden, we are fighting for justice and we will GET IT! We all love you, chloe, brooklyn, your mom and dad EVERYONE! they miss and love you like crazy. i hope johnny gets what he deserves!

This little baby boy is my nephew...I wish I could give him justice myself, justice was NOT saught or served in this case. I feel like Barton county has failed as well!! His mother will go through hell the rest of her life because of the POS. We miss and love you sooo much Kaiden!! RIP lil buddy!!