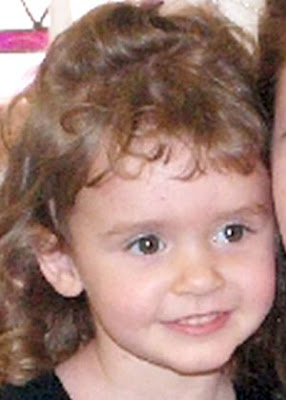 -
A three year-old little girl was killed in a tragic accidental shooting at her home near Stella on Saturday (10-22-10.)

Authorities in McDonald County say Shawna Coberley had laid little Maycen Abigale Coberley down for a nap then heard a gunshot.

Evidence at the scene shows the little girl had been "finger painting" with lotion on the walls of her mother's room and discovered a holstered loaded handgun on a nightstand and shot herself once in the chest.

Southwest Missouri Forensics will conduct an autopsy on the little girl in Springfield, according to McDonald County Coroney Tracy Dowd.

Funeral services will be held at 10 a.m. Thursday at Clark Funeral Home in Granby.
Posted by Kathee Baird at 6:37 PM

That is so sad.It's just bad when they make gun locks,gun cabinets,etc that could help keep the lil ones safe and nobody will use them.

RIP..I watched as my three year old grandson was wheeled out of the emergency room fastened tightly to a gurney with a huge head brace encircling his tiny head. I arrived on the scene just in time to tell him that I loved him as men with medical equipment ushered him out to an awaiting helicopter. He was being flown to a larger hospital where a specialist for his kind of head injury was waiting to perform an operation on his brain to save his life.
Thanks
lakeland personal injury attorneys