Authorities in Branson were called to the Country Bunkhouse Motel on Highway 76 about 11:30 this morning (10-28-10) when a maid found an unresponsive woman bleeding from her neck. When cops  arrived on scene they found Stacy Ann Hopkins-Birmingham, 42, of Omaha, Arkansas was dead.
- 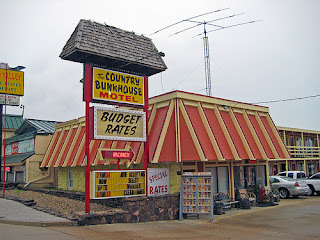 Police Chief Carroll McCullough says, "Circumstances surrounding the death are suspicious and the department is now seeking a male subject who was seen at that location at approximately 10:30 p.m. last night."
Late Friday afternoon (10-29-10) Stewart Ralph Hopkins, 45, of Stockton, Missouri, was charged with first-degree murder and armed criminal action for the murder of his ex-wife.  Online court records show that Hopkins' last address was The Ozark Correctional Center prison in Fordland.

-
Hopkins was arrested by the fugitive division of the Tulsa Police Department at 11:00 p.m. in connection to Birmingham's murder and has been extradited back to Missouri.
Southwest Missouri Forensics conducted an autopsy Hopkins-Birmingham in Springfield and ruled that the cause of the woman's death was blood loss from a stab wound to the neck.

During Hopkins preliminary hearing on March 3rd his attorney argued that Hopkins stabbed Stacy Birmingham AFTER she allegedly stabbed and wounded him....so it wasn't murder.  He tossed that weapon and pulled a folding pocket knife and stabbed her three times.

Court documents say, "Stewart R. Hopkins stated he did this in anger toward (the victim) due to him being left out of his daughter's life."

I jope that f*#@er gets what he deserves for killing my cousin.

@ Anonymous-Your comment was completely unnecessary and moronic. As you should know, there is always a whole lot more to the story then what is printed. For the record, I will say, NO action warrants the death of another, in ANY case. I wont go into particulars with you, but I will invite you to re-read the story above. (If he "disarmed" her, then retrieved his own weapon. Then his life clearly was no longer in danger) Please do a little more research to the stories that you plan to comment on. So you dont appear insensitive and under educated,

Guilty 1st Degree Murder and Armed Criminal Action. Nov. 15 sentencing.
Thank You all Police, Investigators, Attorney's, Jury and everyone else..Most of all Thank You Jesus!! Now you may rest, Stacy. You will never be forgotten.

Guilty 1st Degree Murder and Armed Criminal Action. Sentencing Nov. 15 2012. Thank You all Police, Investigators, Attorney's, Jury and everyone else that made this verdict possible. You were all so kind to the family. Most of all Thank You Jesus! Now you may rest, Stacy. We miss you every single day.You will always be in our hearts,Until we meet again.