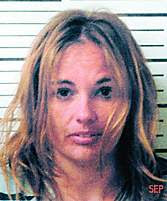 A neighbor called firefighters in Theodosia to report a fire On September 7th, and first responders followed billowing smoke to a trailer near Dora. When a state fire marshal was attempting to determine the origin of the fire he discovered a body in the charred rubble.
- 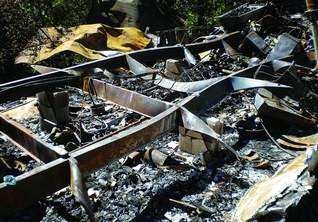 The man, who had to be identified through dental records, was fifty six year-old Charles "Charlie" Earl Peterson. Peterson lived in the area for about a year and a half, but was originally from the Mountain Grove.

According to court documents, Candace Darlene Richardson, 34, and Marty Overby, 31, who are both from Mountain Grove and were formerly married, conspired for about three weeks to steal $30,000 and a large quantity of methamphetamine from Peterson.
- 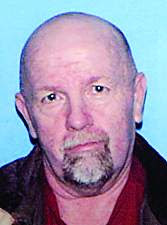 Richardson is in jail, however Overby is on the run from the law and is considered armed and dangerous.

The probable cause statement says that Richardson and Overby told a roommate that they needed money and the woman told them that Peterson had $30,000 in cash to purchase land next to his, "Marty said we need to roll him."

The roommate told investigators that she witnessed Marty pouring a liquid substance in a mason jar and taped triangles to the side of the jar. She stated she, "seen him add gasoline to the jar," and watched as they blew up a mailbox and overheard Richardson say during a phone call "they blew the son-of-a-bitch up."
- 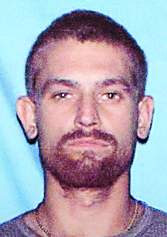 Marty Overby (mug shot OCSO)
-Another witness told Detective Darrin Reed, "Charlie and Candace had been fighting" and
Charlie was cooking his last batch of meth for her because "he was cutting her off
because Candace had been cutting the bag and shorting his customers."

Another witness says he was with Charlie Peterson until 3 a.m. the morning of the fire. "He stated that Charlie and Candace were fighting over money [he thought] and could tell there was a lot of tension between the two."

After the fire it is alleged that Richardson and Overby took Peterson's truck into a field and cleaned it for hours with a spray bottle containing an unidentified liquid substance.

Investigators say Richardson fled to Springfield in an attempt to avoid prosecution and that Overby was driven to Kentucky by a friend for the same reason.

Detectives met Richardson at Barnes and Noble in Springfield and could "tell she was on something," and asked her when the last time she shot up was. "She stated about a week ago." She was then arrested for a probation violation and allegedly became combative.

Court documents say that during a recorded phone call with her daughter from the county jail Richardson, "advised her to get ahold (sic) of Marty and let him know not to talk to the police until he reads a letter she wrote as to what happened so he would know what to say."

Richardson and Overby have been charged with first-degree murder, armed criminal action, first-degree robbery, and first-degree arson. Richardson is also facing charges for assaulting a police officer during her arrest.

Richardson waived her preliminary hearing yesterday.  She was automatically bound over over to circuit court and will stand trial for Peterson's murder.

Kathee, in regards to the case that you are following for the two charged with murder and arson...Today 10/14 was Candace's PHearing and the charges that were showing against her online are no longer showing..can you shed any light on what is going on with the case?

candace is my mother and,she is one of the nicest, most kind hearted people i know she is my best friend and for those of that say mean stuff without knowing the entire story u should keep your word to your self because i don't want my children to look up their grandma on the computer and see people calling her a meth head that is not your place and children should not have to go through that. our family has had enough trouble we don't need help from a bumch of judgmental people

I have known Candace since she was 13. and I do not believe she was the one who done this. the life she went thru from the time I known her to now. she has had a hard life. she is a great person once you get to know her. I know her family is going thru hard time because of this and if I could help out in any way I would.

I think you need to not cover for her any longer. Seems truth is out and she isnt the person you think she is now she is a druggie and a cold blued KILLER!!! tell that to his?family that can no longer talk to him.