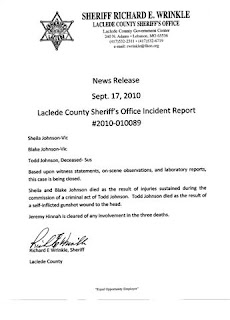 Wrinkle says that forensic evidence has confirmed investigators conclusions that Todd Johnson killed his wife and son in their home, then shot himself in the head as he plunged his truck into a water filled quarry.
- 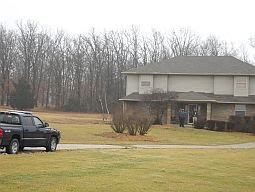 Wrinkle says he is convinced that Johnson was setting up Jeremy Hinnah to take the fall for the murders in a botched home burglary, but Johnson didn't count on Hinnah, who was hiding in the garage of the family home, leaving in one of the family vehicles.

A blood trail along a wall and carpet indicated that Johnson had headed to his surviving son's bedroom but for some reason turned around and left the home. "Only he can tell us why, and he's not here anymore," Wrinkle said in March.
Posted by Kathee Baird at 4:40 PM