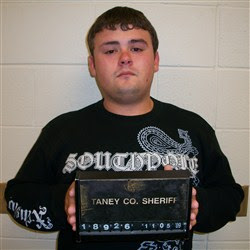 A man from Kirbyville will spend the next five years on probation after pleading guilty to stealing and drug charges.
Mark Lamb, 20, made the surprise plea in February shortly before his trial was to begin.
Prosecutor Jeff Merrell says that Lamb stole a laptop computer, cell phones, wallets and tools in a crime spree that stretched across Taney County from August 10th to September 16th of 2008.
As part of the plea, Judge Mark Orr ordered Lamb must pay restitution of $8,934.36 to his victims as part of his probation, maintain full time employment and perform 200 hours of community service.
Posted by Kathee Baird at 7:26 AM