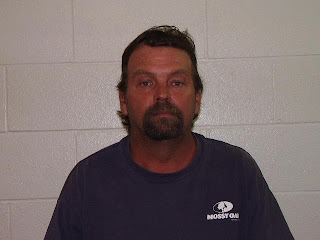 A man from McDonald County charged with voluntary manslaughter for allegedly gunning down his son-in-law on a street in Noel last year will stand trial for the man's death on September 14, 2010.

Prosecutors allege that James Patterson, 48, Noel, shot Marty Reece, 32, during an argument on Alexander Street not far from Reece's home. Patterson told cops that he was defending himself, his wife and their daughter, Jindy Patterson-Reece.

At Patterson's preliminary hearing the chief deputy marshal of Noel, Michael Miller, testified that Patterson told him that he and Reece had spent the day of September 7, 2009, golfing and playing pool. Patterson told cops that Reece had been drinking.

After they split that evening Jindy Patterson called her parents for help saying, "If you can hear me, I need you to come right now." Kim Patterson allegedly told her husband that they should take a gun with them for protection.

When the Patterson's got to Hwy 90 and Alexander Street James Patterson approached the car that Reece and his daughter were in. According to Jindy Reece, her husband sucker punched her father and the two began fist fighting.

At some point during the melee Kim Patterson began hitting Marty Reece over the head with the butt of the gun. Not long after that James Patterson allegedly took the gun from his wife, chambered a round and began shooting. Five rounds were recovered from the body of Marty Reece.

When authorities arrived at the crime scene, they found the Patterson's standing near their vehicle, and their daughter cradling her husband's lifeless body in a nearby ditch.

According to online court records Jindy Patterson-Reece filed for divorce from her husband in February of 2009 and had an active order of protection against Reece at the time of his death.
Posted by Kathee Baird at 3:46 PM

Ill say this much, I knew Marty Reece and his entire family and almost every last one was a woman beater. I know the Patterson family as well and I personally know that Jim Patterson was protecting his family. He is one of the best men I know.