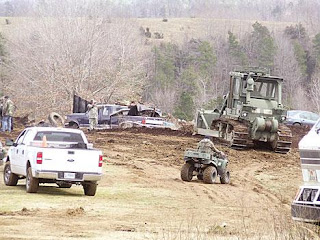 Authorities in Newton County Arkansas are being assisted by several different agencies in excavating the property of David and Ricky Middleton as they search for clues in the disappearance of 20 year-old Josh Middleton who went missing five years ago.

A search warrant was executed on the Middleton property near Mt. Judea on Monday. Sheriff Keith Slape says authorities are also looking for stolen property that they believe is hidden on the property. Authorities plan to move to a second property owned by the brothers today (03-10-10). 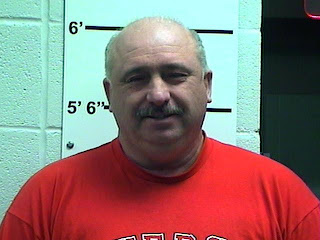 Ricky Freeman, 51, was arrested on a litany of charges in Harrison the same day that House was found murdered. Rickey Freeman's house was destroyed in a fire not long after House's murder and his arrest.

Investigators have recovered quite bit of property in their search this week, but they have not determined if all of it has been reported stolen. Slape says the have found a stolen truck, and log skidder on the property. They have also found a license plate from a vehicle that was reported stolen. Authorities are planning to dig up a vehicle they have discovered buried on the property.

Cops have also seized a trailer filled with tools and other property they have recovered from the search.

Ricky Middleton was arrested on a bond revocation after a bench warrant was issued for his arrest for theft by receiving and altering vehicle identification related to this search.
Posted by Kathee Baird at 10:13 AM